Enter your City name or Pincode

Barmer is a district city located in the western part of Indian state of Rajasthan. With an area of 28387 sq. KM, it is the third largest district by area in Rajasthan after Jaisalmer & Bikaner and fifth largest district in India. The district had a population of 26, 03,751 per census 2011. It forms a major part of the Thar Desert and is a popular tourist destination for many historical sites here. It shares border with Pakistan in the west and Pali & Jodhpur form its eastern border. The major towns in the district are Balotra, Guda Malani, Baytoo, Siwana, Jasol and Chohatan. A large onshore oil field has been discovered here recently and is completely functional now. The city also has India’s first underground military airbase of “Uttarlai military airbase”. 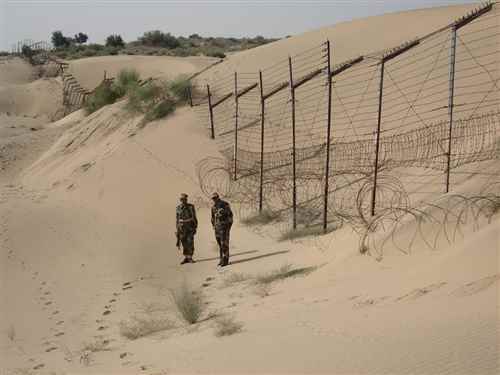 Barmer is located between 24, 58’ to 26, 32'N Latitudes and 70, 05' to 72, 52' E Longitudes. The district has borders with Jaisalmer district in the North, Jalore district in the south, Pali district and Jodhpur district in the east, and Pakistan in the West. Luni is the longest river in the area which is 480 KM. in length and drain into Gulf of Kutch after passing through Jalore. Primarily a desert area, Barmar has a huge variation in temperature. While in winter it drops to 0 °C, in summers it soars to 46 °C to 51 °C. The best time to visit the city is August to February. The average rainfall in the area is 277 mm. The city is well connected by rail, road and air ensuring easy access to the tourists. Some nearby railway stations are Balotra Junction, Barmer Junction, Samdhari Junction and Tilwara Junction. The nearest airport to Barmer is Jodhpur airport. There are regular buses and taxis available to the region from other major cities of the state.

The district was known as Mallani in the earlier times, in the name of Rawal Mallinath who is the son of Rao Salkha and considered a cultural, philanthropical and religious icon in Barmer. Local people worship him as a God. The present name of Barmer was derived by British rulers in the 18th century on the name of its 13th century ruler Bahad Rao Parmar. Initially Juna, 25 KM from the present city of Barmer, was made the capital by grandson of Rawal Mallinath that was later shifted to Barmer in 1552 AD by his descendant Rawat Bhima.

Barmer is known for his folk music and dance, like other desert districts. The region is popular for Bhopas who are the local priests composing music in the honor of deities and war heroes. Langas and Manganiars, also known as Muslim Dholis, are other folk musicians popular here. Rajasthani is the local language mostly spoken by people here, however Hindi is the official language. Every year in the month of April, Mallinath cattle fair is organized here in Tilwara, a place known for its archaeological discoveries. The fair goes on for two weeks and is the biggest cattle fair in India. The major festival of the region is Thar festival that is organized every year by the Government to attract more number of tourists. The festival is organized every year in the month of March.

The district of Barmer is well known among tourists for its carved wooden furniture, woolen industries, handicrafts and hand block printing industry. Indulging in shopping traditional handicrafts is a common thing among tourists visiting here and one can easily witness local people wearing colorful Rajasthani clothes. Sadar Bazaar is the main destination for buying embroidered clothes, while Station Road is famous for wood carvings. Other popular items that one can buy from here are carpets, pottery, rugs, blankets and shawls. 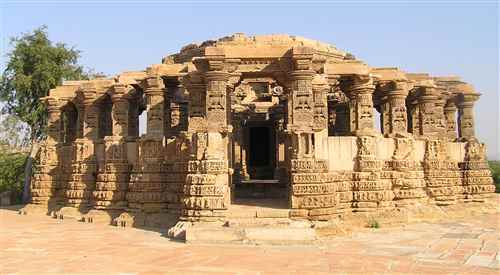 The city of Barmer houses many historical monuments and temples making it a popular tourist destination. There are thousands of people visiting the city every year.

Jagdambe Mata Temple
There are many ancient temples here that attract tourists from all over the country. The city is famous for Goddess Jagdamba temple located here. As suggested by archaeologists, the temple is around 500 years old. The temple is located at height of around 140m above plain land.

Chintamani Parshvanath Jain Temple
This is another temple here that is worth a visit and thousands of pilgrims come here every year. The temple was built in the 16th century by Shri Nemaji Jivaji Bohra. It is believed to the oldest Jain temple in the area. It is also located on a hill top at a height of 46 m above the ground level. The temple resembles ‘Gaudi Parshvanath' temple of Mumbai.

Shri Nakoda Jain Temple
The famous Jain temple was built in 3rd century and has been renovated multiple times. Alamshah invaded and looted this temple in 13th century however failed to steal the idol that was hidden few miles away in a village. The idol was brought back and temple renovated in 15th century.

Devka – Sun Temple
Located in Devka, a small hamlet about 62 KM from Barmer along the Barmer Jaisalmer road, this temple was built in 12th or 13th century. The temple is known for its incredible architecture and is worth visiting. In this village, one can also witness the ruins of two other temples with stone sculptures of Lord Ganesha. The sun temple is also known as ‘Khajuraho of Rajasthan.’

Barmer Fort
In 1552 AD, Rawat Bhima built Barmer fort at hillock in the present city of Barmer. Hill of Barmer fort is 1383 feet but fort is built at a height of 676 feet which is a safer place than top of the hill. The main entrance of the fort is in North direction and safety burg are situated on east & west direction. The fort is surrounded by temples on all sides. There are two important religious places on the hill of Barmer Fort. While top of the hill has Jogmaya Mandir at height of 1383 feet, Nagnechi Mata temple is located at height of 500 feet. Both of the temples are quite popular among people and there is a fair organized here during Navratras.

Juna Fort
Around 12 KM from Barmer, one can witness the remains of Juna Fort that was built in the 16th century and used to be the district capital earlier. There are three ancient Jain temples here. On one of the pillars of Juna Fort, archaeologists found and inscription from 1295 AD that suggests that the place was occupied by people of Jain community. It is also believed that Maharajakula Sri Samantha Sinha Deva was the ruler of Barmer that time.

There are many other temples in the region mostly in ruins. Keradu, earlier headquarters of Barmer district, was attacked by Mohammad Ghori in 1140 AD and he destroyed all the temples here. There is a temple of Lord Shiva here that is believed to be built in the 6th century. Some other temples that can be visited while being here are Asotra, Batada Kua, Brahma Temple, Mahabar Dunes, Kher Temple, Viratra Mata Mandir, Pipa Mandir and Bhimgoda.

Are you a Business Owner?

Add the products or services you offer